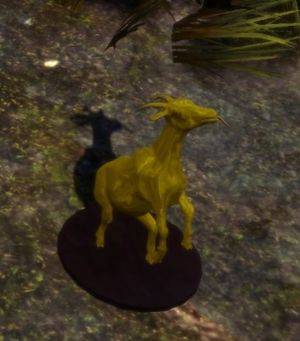 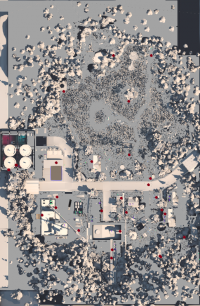 This article is about the collectible. For the quest, please see Trophies (Quest).

Trophies are small golden statues that are hidden around the map. There are 30 trophies each in GoatVille and Goat City Bay, and 20 in Goat MMO Simulator. Collecting all the trophies in each area will unlock the achievements Try Hard, I freaking love goats, and Love or Hate?, respectively, as well as the quests Trophies and Collect All the Trophies. New Mutators will also be earned.

Every trophy can be obtained without any mutators. However, those wishing to make their lives a bit easier may wish to equip the Angel Goat and/or Double Jump mutators for enhanced jumping. Those who want to make things even easier should consider the Builder Goat or Anti-Gravity Goat mutators. In the end it is up to you how much help you want to give yourself.

DLC maps such as Waste of Space and GoatZ have their own trophies and trophy-related mutators.

There are minor spoilers in these lists, play the game first if you want to have the purest goat experience.

Important: There are only 30 trophies in Goat City Bay. To collect a 31st trophy to complete I freaking love goats and Collect All the Trophies, you must exit and re-enter the map to make one of the trophies respawn. Which trophy needs to be collected twice seems to be completely random, but since you've already found them all it shouldn't be hard to find them again. (Not required on Xbox)

For a video guide of all the trophies obtainable in Goat City Bay, see: