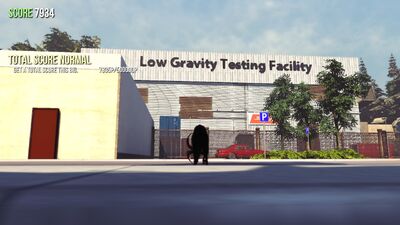 The Low Gravity Testing Facility is a location in GoatVille.

The building is fenced off, but the fence can be jumped by climbing a stack of crates behind the Gas Station. A sign proclaims the building is owned by "Hovertech Technologies Corp.". The brown parts of the wall can be headbutted or licked to gain entrance to the building.

There are three main rooms in the building. On the left is the control room, which is filled with computers and has glass windows to observe the test chamber. The test chamber in the center is filled with fans to simulate low gravity, and has lots of balls and mattresses to play with. There is also a ventilation shaft that shoots the goat out of the building. The room to the right is labeled "Ragdoll Skate" and has a skate ramp and several large towers of crates. As the name implies, the goat can ragdoll to slide along the skate ramp. Near the ragdoll skate, in the wall, there are two container doors. Behind these, there is a fan chute that will launch you to the hillbilly.

The building is located behind the Gas Station on the edge of the map.