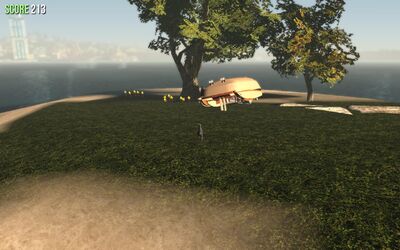 The Island is a location in Goat City Bay.

The island is just barely visible far off the coast of the city.

The island is empty except for two trees, a large number of mushrooms, and a trophy. A deflated volleyball with a face and hair, called Goatson, falls out of the boat when it crashes.

The island can only be reached by getting on the boat next to the Skyscraper, on the Pier. The boat starts moving as soon as you touch it, so make sure to get in quickly. Lick part of the boat so that even if you fall out, you will be able to "water ski" the rest of the way there. Try to unlick the boat just as it hits the island, or you may be trapped under the boat when it crashes.

The Goatson is a reference to the movie Cast Away, where the main character is stranded on an island and begins talking to a deflated volleyball he names Wilson for company.

One can get to and exit the island using the Giant Goat (Whale).

The score bonus "it's a trap!" Is a reference to star wars.