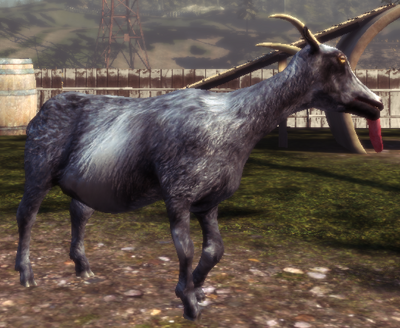 This is your goat. There are many like it, but this one is yours.

Pilgor the Goat may look like an ordinary goat, but she is actually the de facto monarch of goat. She is considered by many to be a dumb-as-a-rock harbinger of Hell and glitches, and roughly 50% of non-goat outsiders hate her for having reportedly barged into their houses, licked them, headbutt them, run into their cars, etc. She resides in Goatville, though has been spotted on many occasions at GoatVille High and Goat City Bay.

Goats are incredibly versatile, psychotic animals. They have many skills from generations of instinct, including: