"Press Special to blow water out of your head."

The Giant Goat is a mutator that turns the goat into a sperm whale.

In the pocket edition, the giant goat trophy is in the same room as the turtles in Goat City Bay. 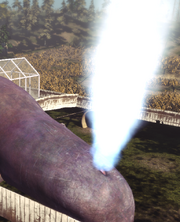 Giant Goat has almost no movement capability other than rolling along the ground. Jumping allows it to move somewhat normally but also twists its body at an angle. Pressing Special causes a fountain of water to erupt from its blowhole.