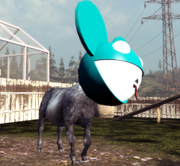 Deadgoa7 is a mutator that gives the goat Deadmau5's blue mouse mask.

Pressing Special changes the background music to that of the skyscraper dance party. Humans around you will dance to the music. If you turn on this in the sewer, the turdles will not attack.

The name style is partly written in "leet" [1337], an alternative typing method used by some people online. The 7 represents a T, hence the name Deadgoat in reference to Deadmau5, being the original reference and the 5 being an S, hence Deadmouse. The name Deadmau5 came from him finding a dead mouse inside of his computer. His friends called him "Dead Mouse Guy" from then on. He then tried to change his chat room name to "Deadmouse" but it was too long so he tried "Deadmau5."