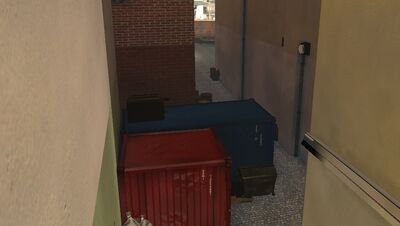 The Alley is a location in Goat City Bay.

The alley consists of the space between the six buildings in the central block of the city. Most of the alley is empty except for trash bags and dumpsters.

There is one fenced-in section in the center of the alley with people dancing, who will attack you if you approach. Entering this section and hitting any of the many objects in the area causes an applause sound effect. There is graffiti of a face on the nearby building wall.

In the area between the Toy Store and the Capra Restaurant & Bar is a golden crown that can be worn when picked up.

In Mobile, a power ring is on top of it, this lets you get the space goat.

The alley is most easily found across the street from the Skyscraper, between the Convenience Store and the Toy Store.